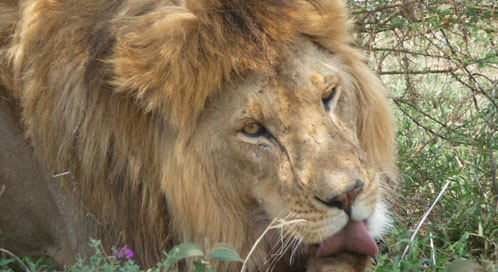 Renowned for its majesty and nicknamed “the king of the jungle,” the lion possesses both beauty and strength. Lions vary in color but typically sport light yellow-brown coats. Mature male lions are unique among big cats due the thick brown or black manes that encircle their necks and protect them while fighting.

Lions consume a wide variety of prey, from wildebeest, impala,zebra, giraffe, buffalo and wild hogs to sometimes rhinos and hippos. They will also feed on smaller animals such as hares, birds and reptiles. Lions are also known to attack elephantswhen food is scarce.

The lion population in Africa has been reduced by half since the early 1950s. Today, fewer than 21,000 remain in all of Africa.

Though lions used to live in most parts of Africa, they are now found only in the south Sahara desert and in parts of southern and eastern Africa. Historically, in addition to Africa, lions were found from Greece through the Middle East to northern India.

Both male and female lions roar, and that roar can be heard over five miles away!

The only social member of the cat (Felidae) family, lions live in large groups called “prides,” consisting of about 15 lions. Related females and their young make up the majority of the pride. A single male, or sometimes a small group of 2-3 males, will join a pride for an indefinite period, usually about 3 years or until another group of males takes over.

Lions within a pride are often affectionate and, when resting, seem to enjoy good fellowship with lots of touching, head rubbing, licking and purring. The males are territorial, and will roar and use scent markings to establish their domains.

Females do almost all of the hunting. They are mainly nocturnal and work in teams to stalk and ambush prey. Lions inhabit grassy plains, savannahs, open woodlands and scrub country. These landscapes allow the hunters to creep stealthily through vegetation and leap upon their unsuspecting prey.

Lions are the second largest living feline species, second only to the tiger.

Mating Season: Throughout the year.
Gestation: Around 110 days.
Litter size: 3-4 cubs.
Young cubs are vulnerable to predation by hyenas, leopards and black-backed jackals. The cubs begin hunting at 11 months but remain with their mother for at least two years.

More on Lion: Threats to Lions »